How many smallholders
are there in the world?

of the world’s
farms are
smallholder farms

of Sub-Saharan
African farms are
< 2 hectare

Learn more about your farmers

Before estimating how many smallholders there are in the world we must first craft a precise definition of what exactly is meant by the term smallholding. This section explores the typical properties of smallholder agriculture, building a profile of the archetypal smallholder farmer.

If you're looking for a quick and easy definition of smallholding then we'd recommend using a rough threshold of <5ha (Lesiv et al., 2018) Otherwise, if you want to deepen your understanding of smallholder agriculture, read on!

While the size of a farm is clearly a necessary dimension of smallholder agriculture, it is not sufficient . A small farm in Brazil is ~50ha, move your focus to India and ~40% of farmers own less than 0.05ha. The term "small" therefore applies to more than just land assets. For example, a small plot growing high value crops with highly trained labour, substantial input usage, mechanisation and irrigation would not typically meet most people's concept of a smallholding. 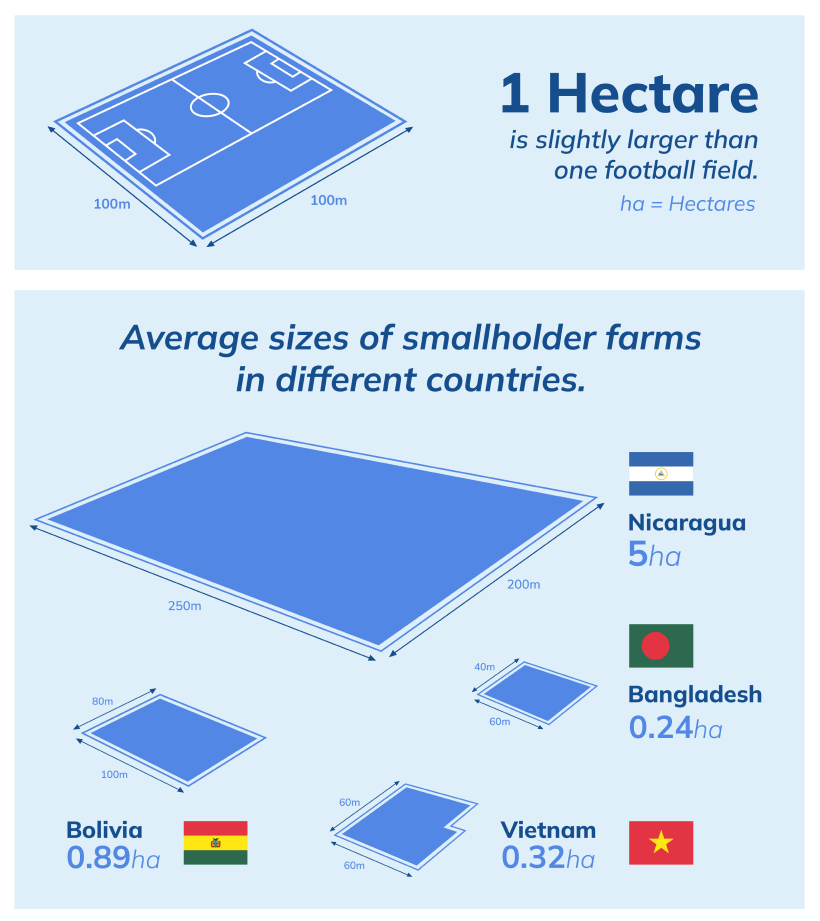 A more rounded definition of a smallholder touches upon the concepts of:

How many smallholders in the world?

Given the complexities in defining what a smallholder farm is, it is no surprise that estimating the total number of smallholders worldwide is no easy task. There are many widely ranging claims, with authors highlighting the multiple caveats and assumptions inherent in their methodologies.

There have been two sophisticated and wide-ranging approaches taken to date. Lowder Skoet and Raney Ricciari et al 2018 aggregated census data from individual countries to build up a complete picture. Alternatively, Lesiv et al., 2018 took an interesting approach using crowdsourcing efforts to outline field boundaries across a representative sample and calculating relative distributions from there. Fortunately, both approaches agree roughly on the number of farmers, differing on the degree of land ownership. 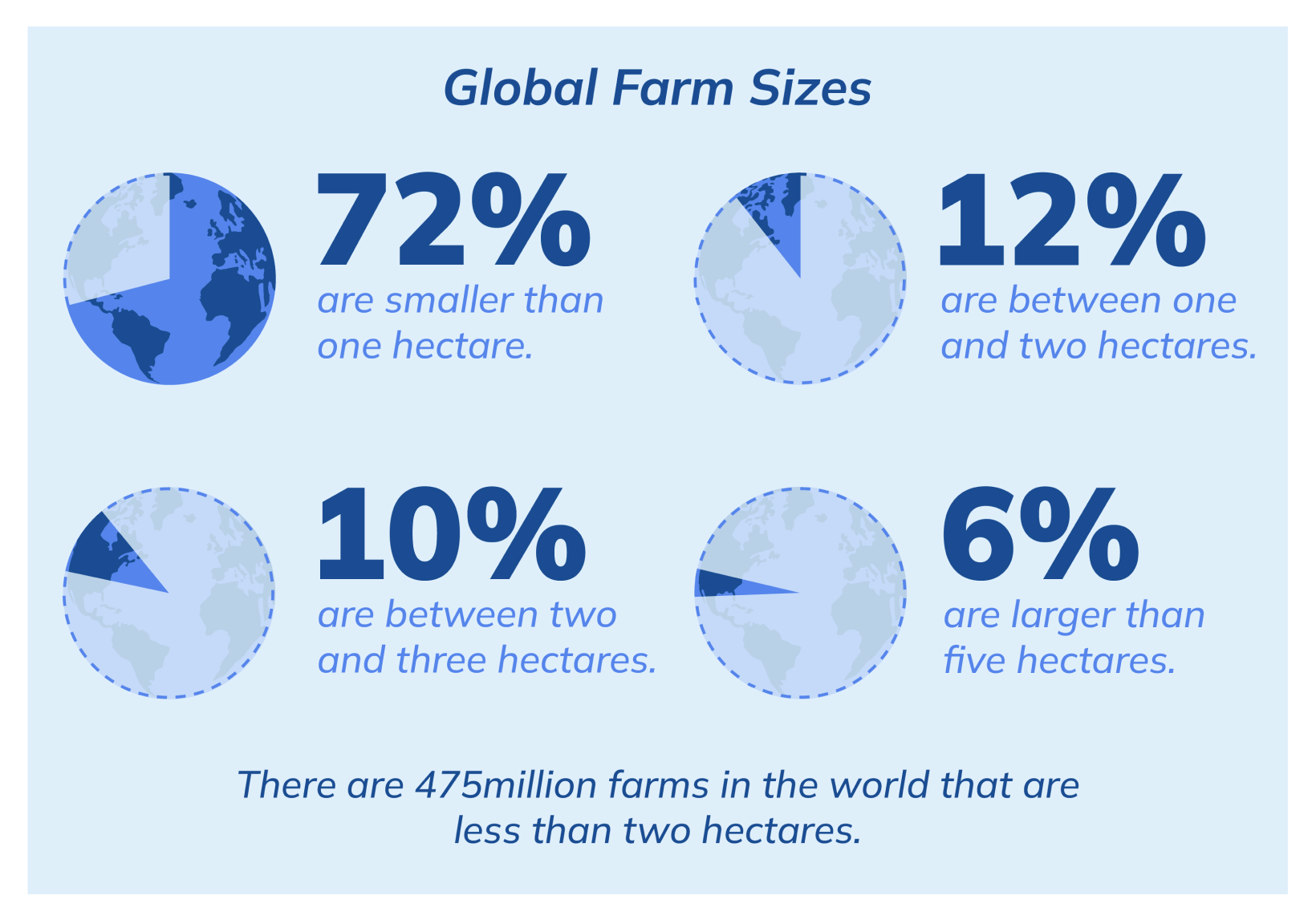 How many smallholders in the world?

Smallholder farms are crucial for maintaining the global food supply and consequently can be found throughout the world. However, the prevalence of smallholder agriculture differs significantly between countries. There are many factors determining the average farm size of a country, for example Jayne, Chamberlin and Headey, (2014) found that in regions where the state actively supports smallholder agriculture, small farms become the norm. We will be exploring the key drivers of farm size in future articles. But today we are focusing on capturing a current snapshot of distribution and not asking why this came to be.

Zooming in on specific regions highlights just how prevalent smallholder agriculture is. Of the 51.3m farms located in Sub-Saharan africa, over 80% (41 million) of them are less than 2 hectares . Current trends also indicate that farm sizes will continue to decline in Sub-Saharan Africa for the next 30 years. In fact, by 2050 Africa will have as many rural people as in China and Southeast Asia combined. 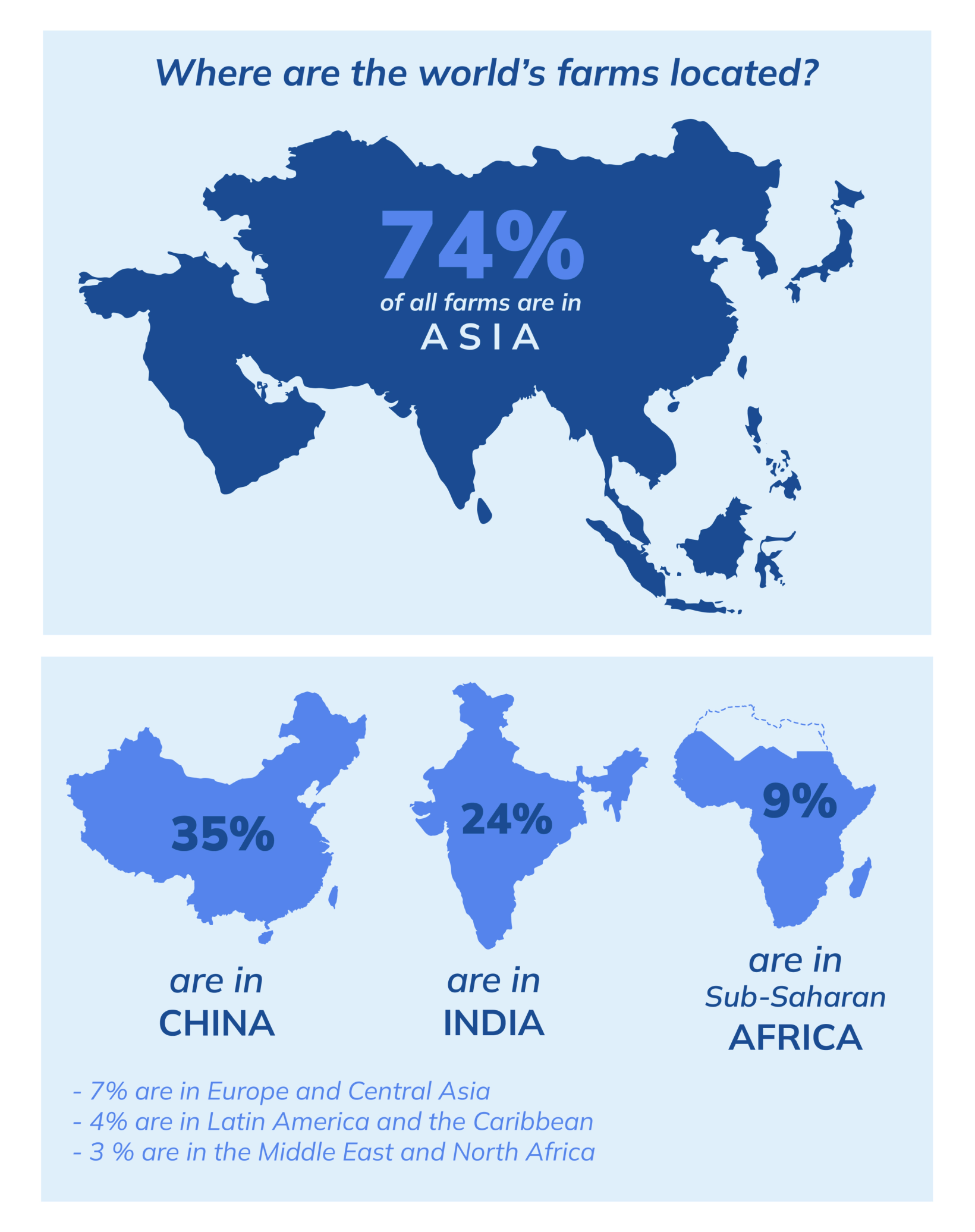 How much land is farmed by smallholders?

Despite their small size, smallholder farmers manage significant portions of the world's agricultural land. Calculating exactly how much land is where the census approach starts to diverge from crowdsourcing. Lowder estimates that small farms operate around 12% of the world's farmland.

Lesiv put this figure substantially higher. Their crowdsourcing approach resulted in an estimated 40% of the world's farmland being managed by smallholder farms.

Narrowing this focus on Sub-Saharan Africa increases this percentage. Around 80% of sub-saharan farms are smaller than 2ha and operate ~40% of the regions farmland.

How much do smallholders produce?

Closely linked to the previous section is the question of how much smallholder farmers can produce on the land they manage. Given the portion of land smallholders own, it is extremely unlikely that the widely stated claim of 70% of all the world's food being produced by smallholders is correct. However, zooming into individual geographies and crops highlights the sheer importance of smallholder agriculture as the backbone of many food systems.

A more likely estimate is that farms <50ha produce 30% of the world's core food crops. In areas where smallholder agriculture is the dominant model, production is even higher. Small farms in Sub-Saharan Africa produce 51-77% of the regions food commodities.

Herreno et al 2017 have a fascinating article highlighting that it is also important to look beyond simple yield metrics and focus on the underlying nutrient production. For example, small farms produce 71% of the world's supply of vitamin A. More widely, small-medium farms produce up to 77% of commodities and nutrients in sub-saharan africa.

It is also important to note that smallholder farms tend to be owned by poorer individuals with a greater focus on subsistence crops. Therefore the crops produced on small farms also have a hugely important role in maintaining livelihoods for an incredibly vulnerable demographic. 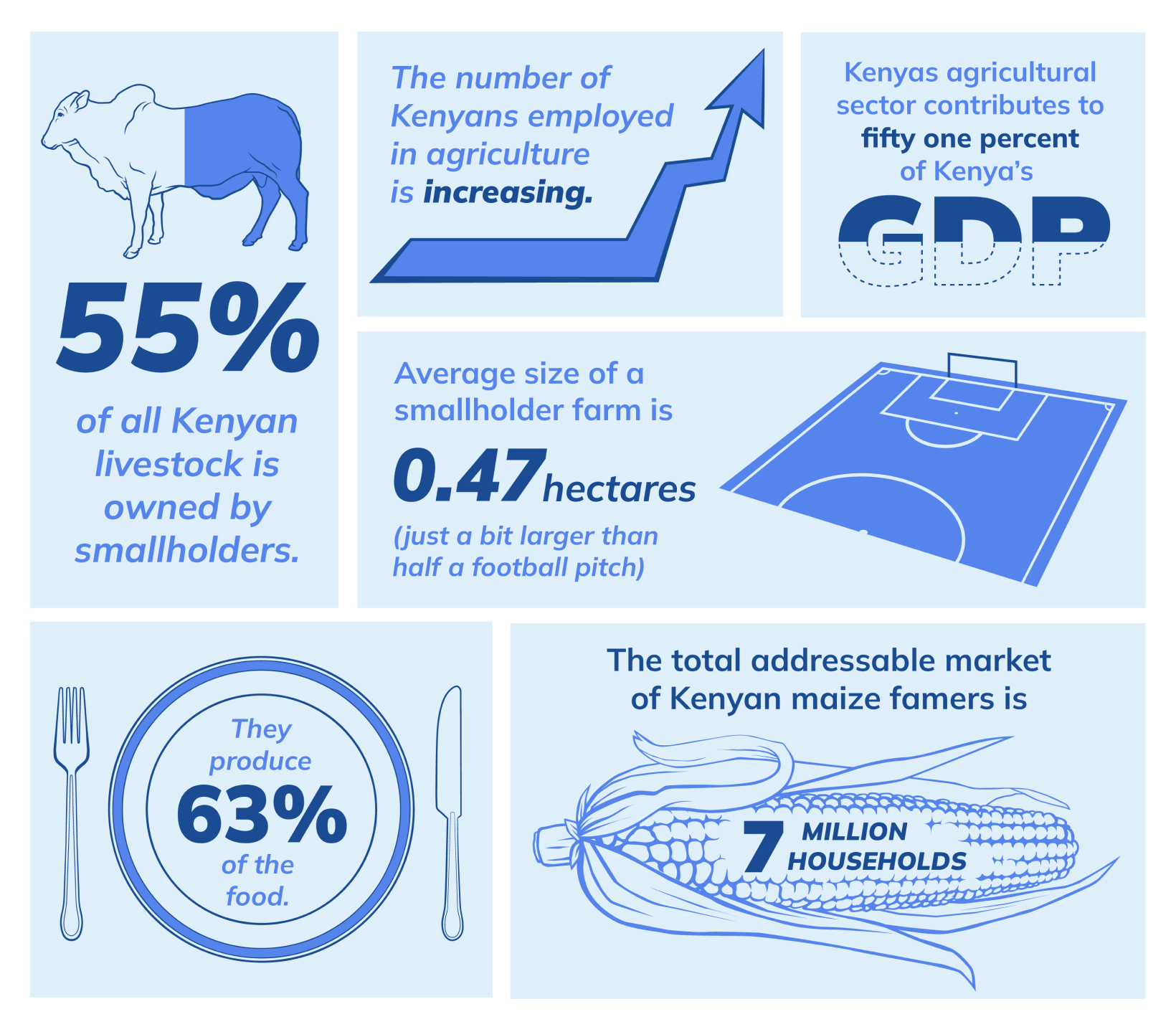 If your organisation works in smallholder agriculture it is hugely important that you can grow a deep understanding of the underlying trends and patterns shaping this industry. The research highlighted above is a fantastic starting point, painting a broad brush picture of smallholder agriculture. However, a common theme you may have noticed is just how variable this sector is.

In order to make an impact you need a strong foundation of data on the specific farmers you work with. By increasing last mile engagement, through accessible and affordable communication channels - such as SMS, Climate Edge can help you connect with your farmers and build a detailed understanding of their needs. To learn more about our services please get in contact "here"